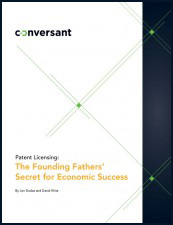 To read the press today, you would think patent owners who do not make or sell products—called “non-practicing entities” or NPEs—are all “patent trolls” who corrupt the innovation-promoting benefits of the patent system. This was unfortunately also the message from the White House on June 4, 2013 when it issued executive orders and legislative proposals targeting patent owners who, in the words of President Obama, “…don’t actually produce anything themselves.”

The truth is, however, that even though startup companies, university researchers, and technology licensing firms don’t manufacture products themselves, they still produce enormous value for the U.S. economy. Companies such as Dolby in sound systems, Tessera and Qualcomm in semiconductors, for example, function as NPE technology developers that help the U.S. maintain its technology leadership in critical economic sectors.