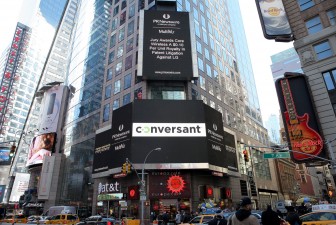 MARSHALL, TEXAS; March 24, 2016 – A jury in the United States District Court for the Eastern District of Texas has awarded Core Wireless Licensing, a subsidiary of Conversant Intellectual Property Management Inc., $3.5 million in damages after finding that LG Electronics, Inc. and its subsidiary LG Electronics Mobilecomm U.S.A., Inc. infringe two smartphone user-interface patents owned by Core Wireless.  The jury’s award is for past damages and is based on a $0.10 per unit royalty.

“We are pleased with the verdict,” said John Lindgren, Conversant’s CEO.  “We thank the court and the jury for their efforts in ensuring that LG compensates Core Wireless for the value of the inventions they are using.”

Core Wireless alleged that most of LG’s recent smartphones, including its leading LG G4 model, infringe two Core Wireless patents. The jury determined that the patents are infringed and not invalid and awarded Core Wireless past damages based on a reasonable royalty of $0.10 per unit, or $3.5 million. Core Wireless will ask United States District Judge Rodney Gilstrap to order LG to pay a $0.10 per unit running royalty on all future sales of the infringing products for the remaining life of the patents, which will be in 2027.

About Core Wireless Core Wireless Licensing Ltd. is an intellectual property management company focused on licensing a major portfolio of wireless patents and patent applications of over 250 patent families, consisting of about 1,700 wireless patents and patent applications that cover technologies used in a wide range of mobile communications devices and services.   Core Wireless is a subsidiary of Conversant Intellectual Property Management Inc.

About Conversant Conversant Intellectual Property Management Inc. is a global intellectual property management company known for its principled approach to patent licensing. With a portfolio of thousands of patents and patent applications under management, Conversant has special expertise in semiconductors and communications technology. For more information, please visit www.conversantip.com.

DISCLAIMER: In an August 23, 2016, opinion Judge Gilstrap affirmed the jury’s verdict that LG infringed and that the Core Wireless patents were valid, but granted a new trial on the amount of damages. The date of the new trial has not yet been set.

Request an expert guest speaker or author from Conversant