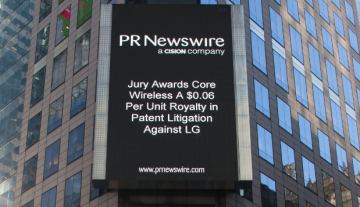 MARSHALL, TEXAS; September 16, 2016 – A jury in the United States District Court for the Eastern District of Texas has awarded Core Wireless Licensing, a subsidiary of Conversant Intellectual Property Management Inc., $2.28 million in damages after finding that LG Electronics, Inc. and its subsidiary LG Electronics Mobilecomm U.S.A., Inc. willfully infringed two smartphone patents owned by Core Wireless.  The jury’s award is for past damages and is based on a $0.06 per unit royalty ($0.03 per patent).

“We are very pleased with the verdict,” said John Lindgren, Conversant’s CEO.  “We appreciate the efforts of the court and the jury.  This confirms the strength of the Core Wireless portfolio.”

About Core Wireless Core Wireless Licensing Ltd. is an intellectual property management company focused on licensing a major portfolio of wireless patents and patent applications of over 250 patent families, consisting of about 1,200 wireless patents and patent applications that cover technologies used in a wide range of mobile communications devices and services.   Core Wireless is a subsidiary of Conversant Intellectual Property Management Inc.

About Conversant Conversant Intellectual Property Management Inc. is a global intellectual property management company known for its principled approach to patent licensing. With a portfolio of thousands of patents and patent applications under management, Conversant has special expertise in semiconductors and communications technology. For more information, please visit www.conversantip.com.

Request an expert guest speaker or author from Conversant