There are a host of reasons to love San Francisco. Great food, picturesque vistas – and inspirational technology.   That’s why for so many engineers, Semicon West is a like a hot-spot tourist destination.  And at this year’s show, the sun was shining on the Internet of Things (IoT).

Mark Adams, President of Micron Technology, kicked off Semicon with a keynote on Innovation and Partnership. He emphasized the accelerated adoption of technology and discussed the five big trends driving the semiconductor industry: Networking, Machine to Machine (M2M), Mobile, Cloud, and Big Data.  Semiconductor companies and their suppliers will need to collaborate more than ever before – while continuing to innovate – to handle mounting challenges and be successful in diversified end-market segments.

While Adams was one of the few speakers who didn’t explicitly call out the IoT, the trends and themes of innovation, partnership and market diversity are suitably applicable to the topic that dominated many of the conference sessions.

There’s certainly  a buzz on connected devices, driven by  the release of smartwatches like the Pebble that was crowd funded on Kickstarter, the Samsung Galaxy Gear, fitness trackers like Fitbit and Jawbone UP24, and the just-announced Apple Health app and HealthKit for health and fitness hardware vendors and iOS app developers. But it’s confusing to know how these categories relate to the IoT.  Adding to the category blur is M2M, which some in the cellular industry use interchangeably with the IoT.  It’s best to think of M2M as the incumbent category of IoT, whose devices are connected via cellular technology and used in end markets such as asset management (inventory tracking) , automotive (think OnStar), and energy & utilities (diagnostics monitoring of pipelines).

The term Internet of Things is not new. It was coined in 1999 by Kevin Ashton in his presentation linking RFID to the internet in Procter & Gamble’s supply chain. Research giant Gartner defines the IoT as “The network of physical objects that contain embedded technology to communicate and sense or interact with their internal state or the external environment.”  But this definition focuses on the devices – the everyday things that can be connected to the internet – and not enough on the networking and interaction among devices.

The scope of the IoT and its potential value gets clearer when reviewing Gartner’s outlook of the market opportunities for the “Things” and the different levels of the IoT stack. 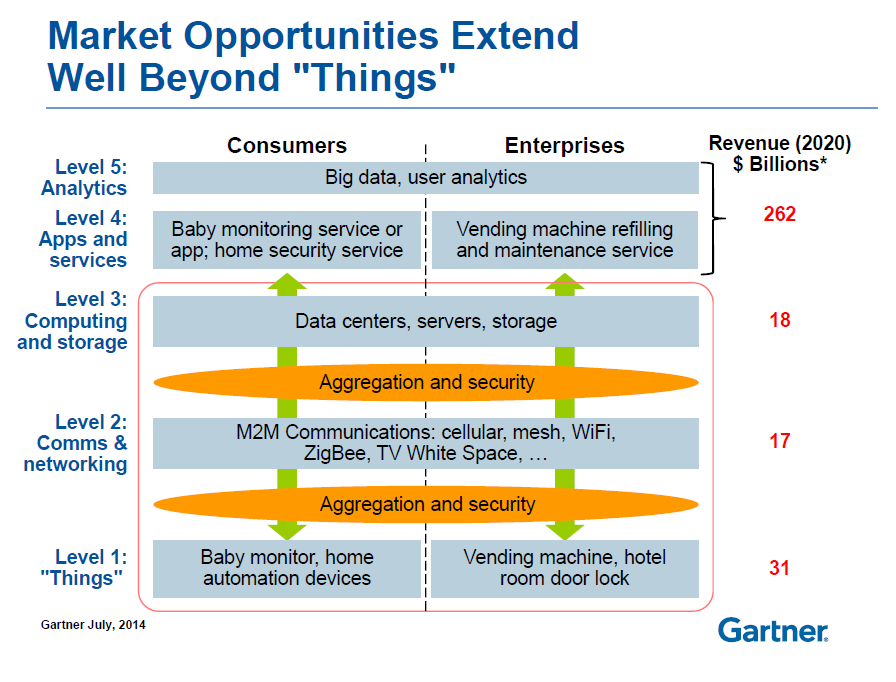 This graphic is intended to show semiconductor companies where they can position their computing, sensing and connectivity solutions and partake in the market opportunity in each of the different levels.

But this stack of building blocks may also be thought of as the IoT ecosystem, where individual “Things” can intelligently interact with other “Things” interfacing with the different levels of the IoT stack. Control of the different Things in the IoT could be based on user-defined rules and collected data in a far more meaningful way than the results achieved by individual connected devices.  This is similar to how the web service IFTTT can simplify your life by automating interactions among different web applications.

Before the tech industry can unlock the true potential of the IoT, there’s a lot of work to be done to deal with the diversity of devices, heterogenous connectivity protocols, multiple standard bodies, security and privacy concerns, competing platforms, and so on.  These challenges can be mind boggling, and the solutions will require innovation in each level of the IoT stack, and collaboration among hot startups and established giants.  If the IoT Startup Showcase (the topic of my next post) is any indication, I’m bullish that the full value of the IoT will be unleased sooner rather than later.

Contact us to learn more about services, partnerships, patent acquisitions, and job opportunities.

Learn more about the team behind Conversant IP.